In a recent media release, Vector Group Charitable Trust said, “We are extremely privileged to be a part of the creative and collaborative sing, sing, sing project. Thanks to BOP Film’s Anton Steel, for the opportunity and to all those involved. Absolutely heartfelt, inspiring and amazing how with no previous singing practice such beauty was transposed.” 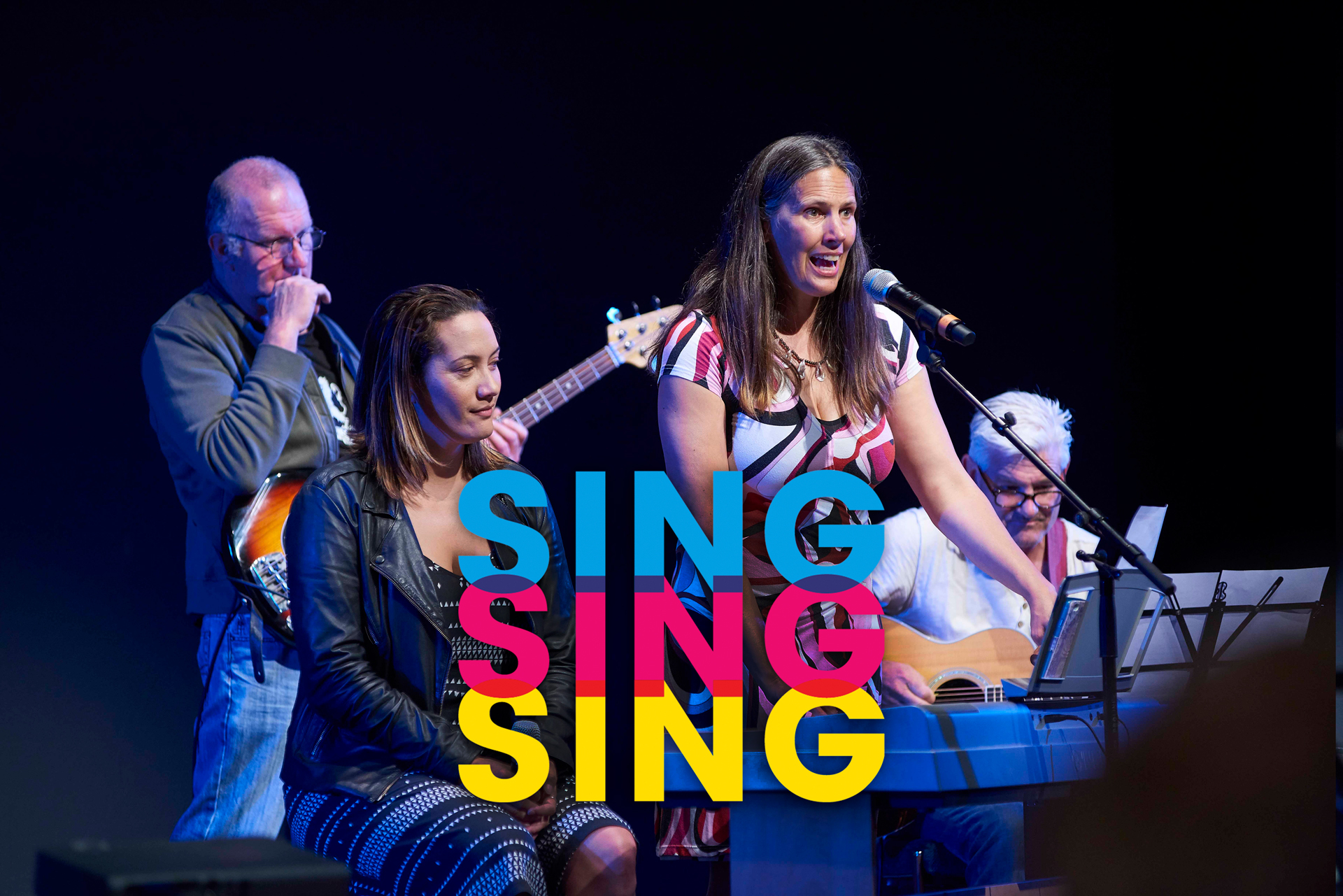 One song. Hundreds of voices. Three choir sections. Two hours to practice. One chance to sing. Live. Together. In harmony. Perfection. Recorded.

Here it is… the GLOBAL LAUNCH of the first ever Sing! Sing! Sing! video! We are thrilled to finally be able to share this with you and hope you agree with us that it was so worth the wait.

Please share with your family and friends… let’s spread the love far and wide.

The story of how Sing! Sing! Sing! came to be is one of magic, grieving, support, determination, the creation of new friendships… and a lot of hard work… On November 19th, 2017 the magic happened.  Over 200 people at our very first Sing! Sing! Sing! event.  So much emotion, passion and love poured out that day and it all began many months before when Sally met Emily.

I remember watching Choir! Choir! Choir! perform Leonard Cohen’s Hallelujah with Rufus Wainwright on YouTube and I was so moved by the event that I thought why can’t we do something like that here?  The power of bringing people together to sing in a such an incredibly powerful and enriching manner was profound and it sparked a desire in me to create that magic here.

As with any good idea we needed the right people to make it happen.  First, we knew we needed someone with the musical ability to lead us and ideally, the nucleus of a choir.  Tuskany’s Tara Fowler suggested we touch base with Emily Macklow from Mauao Performing Arts Centre, so I set up a coffee meeting with Emily in the last week of March to float the idea.  The meeting did not take place.  Tragedy struck.  Profound tragedy.   Emily’s world was devastated by the loss of her beloved husband, Campbell, to suicide.  Sing! Sing! Sing! fell silent in respect of Emily and her family.

On Wednesday July 12th, 2017 somehow, Emily found the strength to pick up the threads of our conversation and met me for coffee at Little Long café in Downtown Tauranga.  Over a turmeric latte and a trim flat white, I met with this incredible lady and shared my passion for creating Sing! Sing! Sing! in Tauranga.  It seems we shared the same passion – Emily had long held a wish to do exactly the same.  The perfect match!  Emily’s music talents and passion and my desire to make things happen and community build seemed to fit well together and the planning began.

Two things were certain.  The song had to be Hallelujah as our first song, that was my only non-negotiable request and the charity we would support?  Emily in her beautiful, soft spoken way posed the question “Would you consider suicide prevention as the cause?”  There was never any doubt on the answer to that.  We selected Life Matters Suicide Prevention Trust as the charity for the event.

Sing! Sing! Sing! has always been about community building and collaboration and once Emily and I got underway we brought in the other partners to make the magic unfold.  Belinda Francis and the team at Media Works alongside Claire Rogers and the Sun Media team jumped on board and graciously donated radio, newspaper and online time to promote the event.  Our next dilemma was finding the perfect venue.  We wanted to do it in the Cargo Shed on the waterfront…such a perfect location.  Sadly we could not secure the space and in frustration reached out to other city centre stakeholders for ideas and another magic partnership was born.

Events Manager Cheryl Smith from Baycourt loved the concept so much that they offered us their venue in support!  Wow.  So, we had a choirmaster, the nucleus of a choir, a venue, a song, the means to promote the event and get the public along.  All that was missing was a lead singer and filming the event for YouTube.  Once again, the magic of Sing! Sing! Sing! saw two beautiful opportunities unfold that became the making of this inaugural event.  Talented, award winning singer, songwriter Ria Hall graced us with a ‘yes’ when Emily asked her to be our lead singer and Award-winning Director Anton Steel of Bay of Plenty Film unwittingly said yes to Sally’s request for ‘someone to film a little event we are doing.’  Sing! Sing! Sing! turned into a major production and the resulting video is the magic that happens when Anton Steel turns a little filming into the most beautiful tribute to a day of emotion and love.  We are indebted to Anton and his team for the extra hours and hours of work poured into the production of the video.

All that was left was for the public to join us at Baycourt on that Sunday afternoon and let the magic unfold.  And unfold it did.  It was incredible to watch everyone arrive.  They flooded into the theatre and took their seats.  Then we announced the song and handed out the song sheets and Emily began to weave her magic,

The way Sing! Sing! Sing! works is simply this:  One song.  Hundreds of voices.  Three choir sections.  Two hours to practice.  One chance to sing. Live.  Together. In harmony. Recorded. On YouTube.

For the first hour Emily taught the choir sections their sections.  It was hard to imagine how it might all come together.  All too soon Ria Hall arrived at 5pm and we brought her on stage to join the rehearsals.  I cannot adequately articulate how unbelievably beautiful it was to start to hear all the harmonies come together and when the final chance arrived to sing, and Emily told everyone “This is it, this is the one.”  something profound happened.  Ria held nothing back, nor did the choir.  The power of music.

We raised over $1000 for Life Matters Suicide Prevention Trust and we raised the roof of Baycourt with the most incredible 2 hours of music.  We’re pretty proud of what we achieved in such a short space of time.  To think the public who joined us had no idea of the song, nor our incredible lead singer and we created this little piece of magic.  Beyond wow.

It has been my profound privilege to be Project lead on this event.  To see the impact it has had on so many people, none more so than Emily, well it fills my heart.  We are so privileged here at Tuskany Agency that we get to create magic every day for our clients and for Downtown Tauranga and Sing! Sing! Sing! is up there with the best of it.

Every time I watch the video and see the faces of the people who came and hear the incredible Ria Hall … wow what a voice … every time I still get shivers down my spine.

The next Sing! Sing! Sing! is planned for march and Emily and I are already loving the planning.  For now though we are still revelling in the heart bursting joy of our inaugural event.

END_OF_DOCUMENT_TOKEN_TO_BE_REPLACED

HEY YOU, SIGN UP AND CONNECT TO VECTOR GROUP!

Stay connected with what is happening in our Te Puke community.